RADICAL ATOMS and the alchemists of our time / Ars Electronica 2016 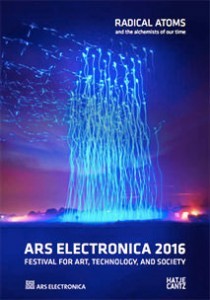 RADICAL ATOMS and the alchemists of our time / Ars Electronica 2016

Festival for Art, Technology and Society

Six entries singled out for recognition with honorary mentions: Sarah Petkus (US) for “Wandering Artist/Robot”, Akira Wakita (JP) for “Mars Zen Topography”, Smite Rasa and Smits Raitis (LV) for “Saving Appearances”, Alois Yang (FR) for “Hear the World Begin”, Kristina Pulejkova (MK) for “We could be Martians” and Miha Turšič (SL) for his submission entitled “Supreorganism” as well as for his pioneering achievements in and strong commitment to the exploration of the cosmos.